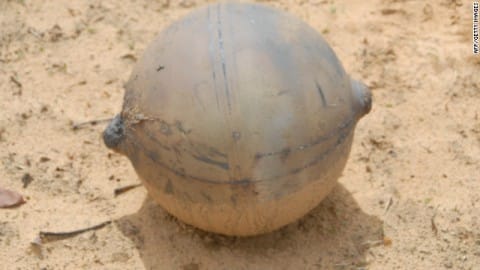 Hello Global Gooders out there we have an interesting story for you today. Apparently a mystery space ball has landed in Namibia which sparked immediate notification of NASA as well as the European space agency. It happened in a very remote grassland but this is not the first sighting or time that this has happened. After about two months the scientists who have looked it over have determined that it is made of a metal that is known to man which helps us understand it a bit but not too much more than that. The real question is whether this is really from space or just a man made hoax to scare people… if it is a hoax one has to wonder if this has to do with some foreign military doing tests or practicing for something or if this is less threatening and just done to stump people and get press.

These balls have been seen dropping throughout southern Africa, Australia as well as Latin America over the past 20 years. The explanation the major players such as NASA have given for this is that it is some sort of space debris which is quite common along with objects from space coming into our atmosphere and land. According to NASA there are hundreds of thousands and potentially millions of these sort of non-trackable objects out in space and close to our atmosphere.

These space objects cause some destruction as well; recently two satellites fell to earth during fall ( ironic right? ) and Russia’s

Phobos Grunt Mars probe is also said to be falling shortly this year due to similar causes from collisions with space objects.
Long Related Article on Washington Post:
http://www.washingtonpost.com/blogs/blogpost/post/mysterious-space-ball-drops-on-namibia–nothing-mysterious-about-it/2011/12/23/gIQAlaXiDP_blog.html