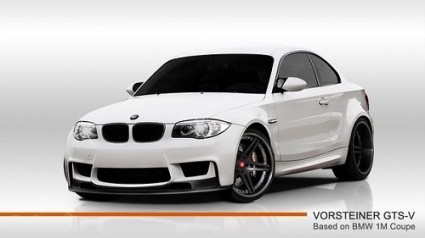 Hey there Beamer fans check out the 2012 BMW M1! This thing looks pretty dang hot and fast.. let alone furious! This particular Beam is made by the California-based tuning company, Vorsteiner, and is fast becoming one of the major tuning companies. An article on TopSpeed.com has a whole gallery of this beautiful, sexy, amazing auto machine! Here at the Global Good Network we love BMW’s…both Rick Jeffries and I someday want an M series whether that be the M1, M3, M5 or M6 and it would be especially awesome to have it tuned by a major player although I am very interested in the BMW tuning firm Hamann ( which we will be covering in our next article ). Perhaps BMW, Hamann, or somebody else out there in the Global Good World would like to sponsor us with one…? Just throwing it out there. Anyways this beautiful coupe we have featured is officially the “1M Coupe GTS-V” which includes such extras as  “a front spoiler with an integrated brake duct system, a front spoiler with an integrated brake duct system, a redesigned rear diffuser with extended aero fins and GTS-V designed splitters, a lightweight boot lid with its own small wing, and a new set of either 19″ or 20″ Forged Concave Wheels”. Oh boy what a turn on.. this thing sounds ferocious; enough to make the blood pump for any true car fan… even all of you benz addicts out there must surely give credit to the BMW M Series for being out standing and out of this world!

Thank you to M3post.com which led me to finding this beauty while looking for a Cars and Coffee related car show event in the bay area.